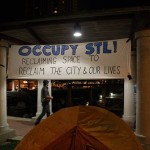 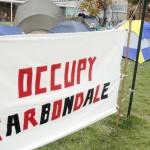 On October 22, the general assembly at nearby Occupy Carbondale (IL) released this official statement: “Whereas the reasons Occupy Carbondale chose this location, between the Bucky Dome and Gaia House on the campus of SIUC, are numerous and variable; And whereas one of those reasons was to insist that the SIUC administration give a fair contract to […] 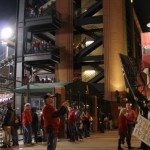 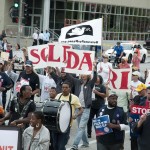 For OccupySTL and others to consider. The following is an official statement put out by #OccupyBoston. It’s an amazing stance that blows the violence/non-violence debate out of the water and instead replaces it with tactical conversations, an affirmation that they will trust each other and (most of all) not succumb to outsiders’ attempts to define […]

A demand and a half.

Our first official demand has been approved for publication. It’s not a whole lot, but it’s getting things going. It reads: We demand all charges brought against the occupation so far be dropped immediately. Public space should be public space 24 hours a day. Tonight’s General Assembly approved the following demand and hopefully the morning […]

This text was originally an e-mail sent Wednesday, October 5 by someone participating in OccupySTL, to a friend in Europe who posted in on libcom.org and now it’s coming back here. Oh, the internet! The statement’s a raw, guttural take on things and, when written, didn’t necessarily know it was gonna end up in the public eye. (The author has OK’ed us […]

The following is from a local blog analyzing Friday night’s march. I have been spending a large chunk of my already meager free time at Kiener plaza taking part in aspects of the occupystl demonstration. As still fairly new to St. Louis I have been trying to grasp the significance of what is occurring around me… particularly after last night’s spectacular […]