Pack the Courtroom for Josh’s Sentencing 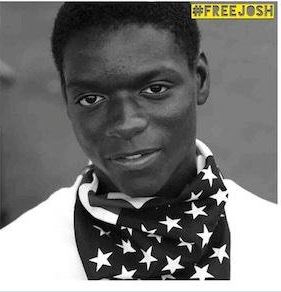 Josh Williams, a 19-year-old rebel and a staple of the fight against racism and police terror in Ferguson and St. Louis will be sentenced on December 10th on charges associated with a demonstration in Berkeley, MO on Christmas Eve, 2014. Let’s show Josh and all our imprisoned rebels that we’ve got their backs.

Josh’s lawyer and supporters want to offer the judge other perspectives on Josh that those the prosecution and police have to offer, and think that supporters and friends being in attendance at his sentencing is a good way to do that.

Also, an even better way to show support is to write letters to the judge talking about our experiences with Josh, his passion and character. Letters can be addressed to:

Also here is a poster about Josh’s sentencing hearing that can be printed and posted up around town.