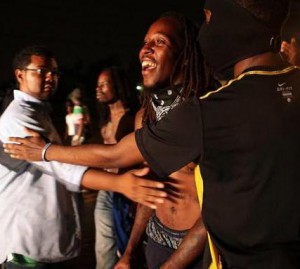 For everyone who participated in the Ferguson unrest, we all have our unique experiences. And at some point, either on Day 1 or Day 101, we all inevitably ran up against some internal force that sought to limit the creativity and explosiveness of the moment, mirroring the actions and words of the State and business owners. This collection of writings is for those of us frustrated by these (sometimes difficult to name) suffocating forces. Thankfully from the get-go most saw through the parasitic leaders like Jesse Jackson, Al Sharpton, Charlie Dooley, and even Ron Johnson.

But an array of controlling forces saw their opportunity to thrive. From the reactionary Nation of Islam and New Black Panther Party, to the broken-record (but increasingly savvy) reformists of OBS and MORE, to the “revolutionary” Pan-African, black-capitalist nationalist militants, to the “new civil rights movement” of young activist media-darlings and their followers, to Left-leaning ministers. Their methods of control have ranged from physical (uber-machismo, replacing the police on the streets, running people out of spaces, openly colluding with politicians and the police, etc.), to psychological (seeing autonomous initiatives and bringing them into their fold, spreading rumors of “outside agitators,” etc.) to linguistic (normalizing frameworks that labels those who think critically as divisive or juvenile or even racist), to mediatory (creating controlled and pacified “actions” and “demonstrations” to funnel our energy away from rioting, looting and reclaiming space; creating “dialogue” between us and the police through laundry lists of “demands,” etc.)

At this point, it would appear that these forces (in collaboration with the cops, the media, the politicians, etc.) have managed to squeeze this rebellion until there is now very little of it concretely left. This is the role that they have always historically played and will continue to play until we stop listening to them. Something beautiful and creative has now, once again, been boiled down to endless charades in front of the media cameras, lists of demands, leaders, specialists, trainings, workshops, organizations, funding drives, and on and on and on. But the memory of what it felt like to act together in the streets and ignore the calls for calm live on inside those of us who experienced it and are the building blocks of a world without police murder.

Each of the following critiques was written in a particular place at a particular juncture of time when various unimaginative forces were rearing their heads to take control of some rebelliousness. Each place is different, as is the time period, but these remain valuable resources for those feeling disillusioned with the self-proclaimed leaders and seemingly immovable, faux-participatory frameworks of thinking and acting.

REACTIONARY TENDENCIES
A Proletarian Critique of the Nation of Islam

NATIONALIST TENDENCIES
James Carr, the Black Panthers and All That
The Continuing Appeal of Nationalism
Anarchism and the National Liberation Struggle

REFORMIST TENDENCIES (THE LEFT, PACIFISM, “PRIVILEGE” POLITICS, ACTIVISM)
The Nature of Police, the Role of the Left
Who Is Oakland: Anti-Oppression Activism, the Politics of Safety, and State Co-optation
Dangerous Foundations: An Argument Against the ‘Identity’ in Identity Politics
Smash Pacifism; A Critical Analysis of Gandhi and King
Preliminary Theses for a Longer Discussion on Essentialism and the Problem of Identity Politics
Break the laws/Break the chains: Political reflections on Mike Brown and White Supremacy from Oakland CA
Lines in the Sand: Three Essays on Identity, Oppression, and Social War
Give Up Activism: A Critique of the Activist Mentality in the direct action Movement
Accomplices Not Allies: Abolishing the Ally Industrial Complex, an Indigenous Perspective & Provocation
“Activism” and “Anarcho-Purism” and the ensuing debate (1) (2)

SOME USEFUL IN-DEPTH HISTORIES OF REVOLTS THAT FACED THESE COUNTER-REVOLUTIONARY TENDENCIES
We Are All Hooligans: Youth Revolt in France 1994
Worker-student action committees, France May ’68
So Near, So Far: A History of the British Miners (1984-85) Strike
Detroit, I Do Mind Dying (1960s & 70s)
A disgrace before God: Striking black sanitation workers vs. black officialdom in 1977 Atlanta

One response to “Online Resources for Anyone Disillusioned with Ferguson “Movement””