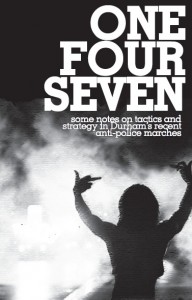 The following is an excerpt from the zine One Four Seven: Some Notes on Tactics and Strategy from Durham’s Recent Anti-Police Marches. On Friday, December 5th protesters in Durham, NC took over the Durham Freeway (Rt 147). What follows is a reflection on the tactic used there of pulling objects into the streets to aid in the blockade. Read the whole article here. Or download the zine here.

The final example of dragging objects into roadways deserves its own brief discussion, as both marches featured this activity, and it repeatedly resulted in both enthusiasm and controversy. At one point in the first march, for example, an older white women screaming “Peace!” futilely pulled backwards on a piece of fencing as several others dragged it into the highway to, in the interest of actual safety, slow down speeding traffic. Of course, there’s nothing particularly violent about moving a physical object from one part of a city to another—perhaps what she really meant to scream was “Order!”

It goes without saying that demonstrations, riots, and strikes have been pulling things into the streets for centuries, from the barricades of the Paris Commune in 1871 to the burning highway fires of Oakland last week. Blocking the flows of goods and people, and in particular state forces, has been an intuitive feature of social struggle for time immemorial, and it’s a lot easier (and safer) to do so with inanimate objects than human bodies.[2] Often it is an absolute practical necessity. That most of these protests across the country have been blocking major thouroughfares with only large groups of people rather than physical barricades is a testament to the numbers of people invested in this struggle, but it is also a testament to our current inability or lack of committment to hold space for longer periods of time. A group of people eventually has to move or leave, whereas a neighborhood or city center or rural highway can be blocked and defended with a series of physical barricades somewhat permanently, and often with far fewer people.

Of course, nothing like such barricades have been attempted in Durham in the last two weeks, and the relatively disorganized and haphazard attempts to drag objects into the street—dumpsters, newspaper boxes, trash cans, construction fencing—might appear juvenile by comparison. By itself, though, this observation is not so much an argument against using physical objects as it is an argument for us to do it better. A real barricade is not built by two or three bodies running along with torn fencing while trying to keep up with a march, but rather by an entire crowd with the confidence and patience to do so. Such a barricade can open up space—for assemblies, meals, rest, medical care, making art, fighting back—within a zone of conflict in ways that are difficult to currently imagine in the American context. If we want to establish and spread zones of social life that are temporarily or (one day) permanently autonomous from the police, this is a part of that puzzle, and practicing now will pay off later.

It should also be said that even small efforts to bring objects into streets, within the context of a quickly moving march, can hold a tactical wisdom: They can be an excellent way to delay police vehicles that are following the march. A series of heavy dumpsters dragged into lanes of traffic, for example, can disrupt police attempts to transport and set up lines of riot cops, like the ones that were beating and arresting people on Friday night. It’s also worth pointing out the fact that sometimes large and impressive and tactically significant barricades start out with just a few youth pulling shit into the street because they’re pissed off. Disruptive protest tends to resemble an improvisational jazz band more than a tightly conducted symphony. Together we may have a broadly understood plan, but beyond this we are reacting in real time to the different melodies others are playing, seeking to build off of their expression rather than stifle it. Those more accustomed to permitted and tightly scripted protests may have to adapt to this.

At the end of the day, we would encourage those who are troubled by such acts to keep in mind that, at least in the eyes of our enemies, blocking highways is no different than blockading streets with physical objects: Both are illegal, cost capitalists and city officials time and money, and generally disrupt the social peace these authorities so dearly wish to preserve. It might be that barricades meet more resistance from the authorities, but this is hardly a reason in itself not to build them.

Others might argue that the property destruction implied by such acts is a distraction from the struggle against racist police, or “alienates the people.” Sacrificing the security and disruptive power of a demonstration, however, on the altar of lowest-common-denominator platitudes that seek to appeal to “the masses” is a way to contain our movement rather than expand it. This struggle has already put such objections to rest, bringing more people into the streets by far than the much more less militant struggles that preceeded it.[3] The looting and arson of stores that happened in Ferguson already established a clear wisdom that speaks to both the economic nature of this struggle as well as the lengths to which many people are willing to go. Attacks on business and disruption of commerce is fair game.

One final point we would make, addressed to those who have been engaging in this activity: don’t physically divide the march! When fencing and the like is pulled into the street in the middle of a march, it can divide us into two groups, the second of which is now sandwiched between an awkward (though usually permeable) phsyical barrier on one side and trailing police cruisers on the other. That’s a dangerous situation to be in. Much better to wait until the last of the march is passing by, then pull the objects in front of the police cruisers and promptly run to catch up with the crowd. It’s true that we’re more likely to be seen by the cops this way (wear a mask if you like), but more importantly, we won’t unnecessarily divide ourselves or bust up people’s shins on some metal newspaper box they failed to see on the ground in front of them.