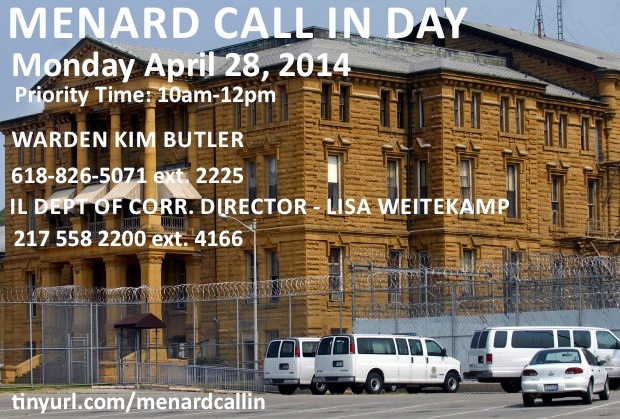 On this upcoming Monday, April 28th we are asking and encouraging people to participate in a Call-In Day in support of the prisoners in the High Security Unit at Menard Correctional Center in Illinois who are facing retaliation for engaging in a hunger strike in January. Prisoners there have been beaten by guards and metal boxes have been placed over their windows—preventing future engagement with noise demonstrations outside the prison, but also preventing sunlight from coming into their cells and increasing the sensory deprivation they experience in solitary confinement.

We hope that any pressure on the administration can draw attention to the inhumane treatment prisoners are forced to endure and help prisoners get their demands met.

We are trying to focus our calls between 10am and noon on Monday, April 28th: But calling at other times is also useful.

CONTEXT FOR THE CALL-IN DAY

In January 15th, 2014, prisoners at Menard went on a hunger strike due to their placement and retention in severe isolation, under inhumane living conditions, without notice, reasons or hearing. The strike ended about a month later.

On Saturday, April 12th, maintenance workers drilled big metal boxes on the outside of the windows in the High Security Unit (HSU). Prisoners in the HSU can no longer see out the windows and barely any sunlight comes in. Prisoners were told by the guards, “How do you like your view now?” Prisoners think it is in retaliation for their hollering out to the protestors that marched outside the facility during the hunger strike.

On the same day, the Special Response Team was called into the HSU to do a cell shakedown and in the process beat and mistreated several prisoners, including Joseph Tillman #R40962, whose head was repeatedly slammed against a block wall.

SOME POINTS TO STRESS ON THE PHONE WHEN YOU CALL-IN:

Here is the original list of demands. According to prisoners, conditions in the High Security Unit include: