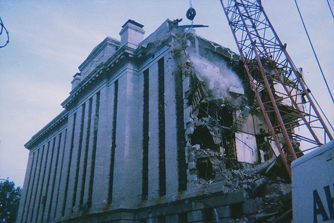 The article below was originally published in the now-defunct St. Louis Globe-Democrat the day after MLK’s murder. The second article is an excerpt from the St. Louis Post-Dispatch, containing information about vandalism and arson that took place around the city that night.

Both articles use the horrifically outdated term “Negro” to refer to people of African origin. It’s a relic from a more overtly racist time. We’ve reprinted the articles with this language intact so as to not “clean-up” the language of the racist people, time and place that produced these words. But despite our objection to this terminology, the words “African-American” can be said with just as much contempt and hatred as the word “Negro.” Prettying-up the reality of racism only makes it harder to fight, as Black men continue to be jailed, beaten and murdered by the State (cops, courts, prisons, mental hospitals, etc.) at alarming rates.

Remembering the history of rebellion to the racist society we live in can give us strength to continue to fight or even just to survive in this world.

by Richard Lott and Charles Oswald

The assassination of Dr. Martin Luther King touched off a riot by 96 Negro prisoners in the City Jail at 8:30 p.m. Thursday, authorities reported.

Police used tear gas to quell the rioters on the fifth floor of the jail at Clark avenue and 14th street. Warden A.J. Graves said damage was extensive, including a broken television set on which the inmates had received news of Dr. King’s death.

They ripped out plumbing, electrical wiring and fixtures and broke windows. Several small fires were started, but did not spread.

Police had the riot under control by 10 p.m., and removed rioters to holdover cells of the Central Police District. Two were taken to City Hospital, one suffering a cut foot and the other complaining of stomach pains, police reported.

Arthur J. Kennedy, city director of public safety, said the riot was due to “years of frustration and denial for the Negroes.”

Mr. Kennedy declared that Negroes are denied equal rights in courts and cannot afford lawyer, so they are made to sit and wait for trail. The overcrowding of City Jail was partly to blame, he said.

He added that he anticipated trouble at the jail following Dr. King’s murder, and said that the superintendent of City Workhouse “is presently sitting on a powder keg.”

The Mobile Reserve was summoned shortly after the riot started. They started using tear gas at 9:35 p.m. to subdue the rioters.

During the riot, smoke was observed in the northeast side of the jail. Firemen were called to the jail, but he blaze caused only minor damage. They later used ventilating fans to clear the gas from the building.

Police brought out the prisoners, many of them with clothes torn, coughing and crying from the tear gas. They were handcuffed with their hands behind their backs, and were loaded into police cruisers for transportation to holdover cells.

As they were brought out of the jail, several prisoners shouted obscene remarks to police and reporters. They declared they would restart the riot.

Police kept a tight security on the jail, during and after the riot, refusing to permit newsmen to enter.

Overcrowded conditions at the jail have been assailed recently by several grand juries.

The February term grand jury called the jail “an archaic, dilapidated, grossly overcrowded relic of the early part of the century—totally inadequate to meet the needs resulting from increased population and the relentless escalation of the crime rate.”

That jury reiterated the need for immediate action leading to the provision of a new and adequate jail. The December term jury called for a study of a bond issue to pay for construction of a new jail.

Built in 1913, the jail has a capacity of 426 inmates. In recent months, its population has exceeded 400 on several occasions. Grand jurors have noted that exercise and recreation programs for prisoners are non-existent.

The jail has been the scene of numerous disturbances. Last Nov. 27, an outbreak of rioting in the jail resulted in injuries to two prisoners and a policeman.

That disorder was touched off when guards sent to remove two men from the “bullpen” on the third floor were rushed by other prisoners.

A list of grievances submitted by rioters in November blamed the disturbance on tension created by allegedly insufficient food, overcrowding, “unfair” treatment by the courts and racial prejudice by jail personnel.

In November 1966, about 40 prisoners protested about evening meals and set fire to two mattresses. In both instances, guards put out the fires.
Riot at City Jail; ‘They Killed Our Leader’

There were other scattered disturbances last night.

An attempt was made to set fire to a former fire station at 3934 Enright avenue that neighboring Negroes have unsuccessfully sought for a recreation center. Someone splashed gasoline on the east side of the building and set fire to it. Firemen put out the blaze.

A Molotov cocktail was thrown at the front window of a grocery store at 812 Academy avenue but a heavy screen deflected the missile and no damage was done.

Windows were broken in five stores in the 1300 block of North Kingshighway.

Police reported that bricks were thrown through the windows of automobiles belonging to Ronald Odette, 8852 Cozzens avenue, Jennings, and Aroba newton, 25 University street, last night. The incidents occurred at the intersection of Jefferson and Cass avenues where the drivers had stopped for a traffic signal.