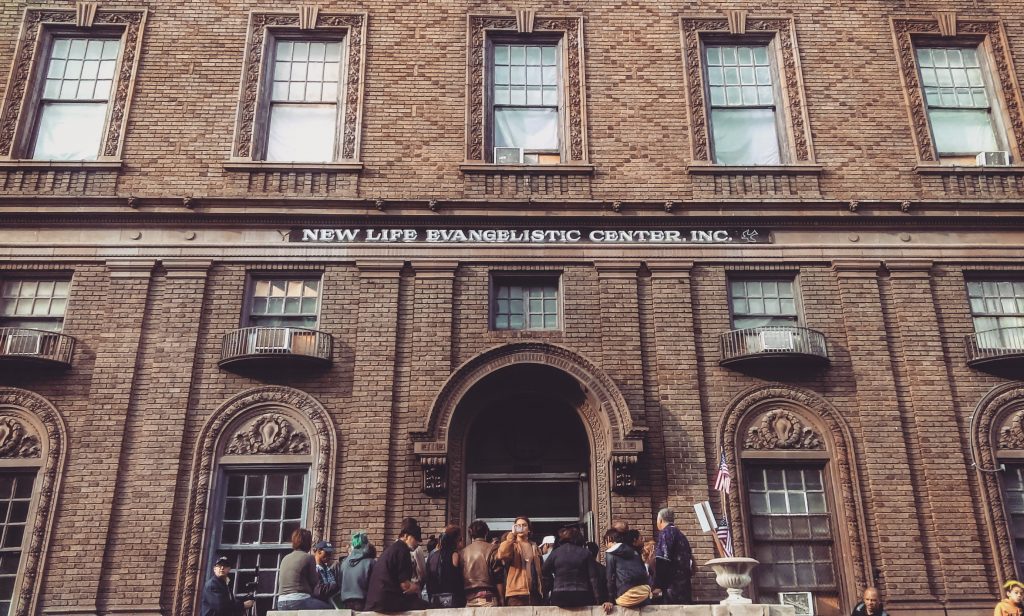 On April 2nd, 2017, the New Life Evangelistic Center (NLEC), a homeless shelter, ministry, and television station was forced to close down by the city after years of back and forth resistance. The shelter is the only one in the city that allows pretty much anybody. Many folks who have been kicked out of other shelters use it as a lifeline because there is very little vetting processes to get in.

Anyone who has been homeless or has struggled alongside homeless will know, like any grouping or identity in society, there is no homogeneity that can be spoken for. Organizers that want to organize the homeless will find themselves patronizingly creating false narratives that obscure real dynamics. Out on the streets, there are folks who are mentally ill, others who have substance abuse issues, others who lost their house to foreclosure, others who are incredibly ambitious and set up autonomous tent cities, others who prefer the streets to four walls and still others for other reasons. It’s a complicated situation and sometimes it’s easy to frame everyone the same, to assume that people want the same thing.

Being homeless is a daily struggle of being managed by the city and its police, business owners and folks like Larry Rice, the owner of NLEC. These entities manage the space folks can take up. They manage the ugly inevitability of a system that needs the poor to exist, that creates expendable populations because the game is rigged for only a select few to win. Much like your boss needs workers to manage in order to make a profit. And the same boss can’t hire everyone either, leaving a surplus population that the police and the city have to manage. Not everyone can be rich—that would defeat the purpose of capitalism. So there will be many who must be poor, unemployed, employed, sometimes homeless. There is a commonality we all share: someone or something with more power and money is always seeking to squeeze us dry and push us around like we’re merely bodies in a game.

These people with power and influence often speak and claim to know what is best for large groups of people “below” them, hiding the actual reality and their role in it all. Like the city claiming that NLEC is a safety issue that is dirty or breeding crime; all the while buildings stand empty and they give more credence to developers like Paul McKee who have ravaged and redlined whole neighborhoods. They also have no qualms auctioning off people’s homes when they can’t pay their taxes.

This struggling city needs money and (to them) its best hope is to clear out any elements that are seen as unproductive to the free flow of capital and state power. This is why they schedule votes for football and soccer stadiums over homeless shelters. That is why they ask us to vote for more police. Businesses and people like McKee give them more potential money and the police protect that money. We, the poor, aren’t a good investment. Their solutions and rhetoric about what should be done with us continue to reinforce the very institutions and attitudes that keep the rich rich and the poor poor.

We shouldn’t fall into this trap of what or who is productive or a good investment. We are not an investment. We are not people who want jobs from bosses. Those with power and money make us into these things and make us need them. And we only work for them in exchange for their scraps of money so that we can afford their scraps of food. The true story of what we go through and what we can accomplish is in the streets, warts and all, not in the productive rhetoric of job training or capitalist success. It doesn’t come out of empty halls of power, the parasitic churches that steal our money, the dead mouths of the politicians, the jails and guns of the police and any of those who strive to speak for us and merely manage our conditions. 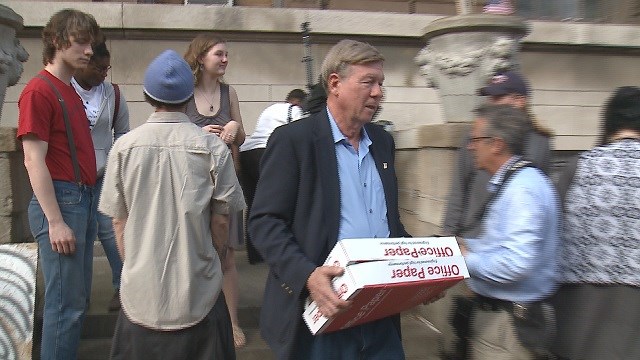 Larry Rice, a street preacher, owner of the NLEC and current mayoral candidate has been a fixture in all this for decades. He’s a Christian and has been champion of the poor and destitute. He is also a wild opportunist and politician who uses and preys on poor folks in his schemes.

The stories of squalid conditions inside NLEC that the city and business owners are using as reason to close the shelter do not just come from our enemies, but also from some of those who live on the streets and stay in his shelter. But like any stories, it depends on whom you ask, because for many this place is a god-send, one of the only places that will take people who have been kicked out of other shelters.

His shelter is full of trauma. It would be easy to blame him, but really, it’s a mix. Being homeless is not a walk in the park and some folks experience horrible things or do shitty things to each other while on streets, whether because of the stress of finding a place to eat or sleep, substance abuse, misogyny, racism, etc. Rice gives space for those things to fester, but so does the city, so does this society.

The Christian doctrine preaches that it is a duty of the more fortunate to “help” the poor, but the ones who created this doctrine were the rich and powerful looking to keep their power through the use of “charity.” Rice is firmly in this tradition, whether his intentions are good or not. Charity needs a society based around class stratification to “help” the poor in the first place. Kind of like the idea that trickle down economics eventually gets to the poor. The crumbs that fall from the tables of the rich get to us at some point, so they say.

The same cold society that kicks you out on the street also has a strong charitable streak within it. This is not hypocritical at all, it is actually a very much a way to keep us from self-organizing together or launching assaults on the institutions and people who have all the wealth. It actually stops us at every chance from building solidarity and facing the true enemies and institutions that enforce poverty.

This comes in the seemingly benevolent guise of religion, but also comes in the form of police and more secular forms. The rich and its police protect us from getting the plentiful amount of resources, land or houses freely, making them artificially scarce, even if these things aren’t being used. Christianity, telling us that the meek will one day inherit the earth, pretty much fits into this. Forcing us to pay patronage for the things we need. Rent, bills, tickets, taxes, through prayer, etc. If we can’t afford their price or play their game, we might very well end up on the streets and get their scraps through much needed charity.

It might look like folks who share similar conditions taking over space and buildings themselves to help themselves without waiting for city or charities to help them. Whether this is out of pure necessity and/or reaction to the stiff rules that exist in many shelters. In fact, when it comes to the homeless, this happens everyday.

Most notable were the various manifestations of Hopeville, a string of tent villages along the river north of downtown that have popped up over the years. Charities were involved in these camps to some extent. But the folks who lived in them often determined the true power and sway of them, instead of those who control the shelters and spaces where poor people are designated to be by city sanction. This a the space of their own.

The first Hopeville was in the Carr Square neighborhood in 2010. Before North Tucker was revamped and graded to make way for the new bridge over the river, it had an old train/trolley tunnel underneath that you could access. Dozens of folks occupied this tunnel and the valley outside its entrance. Most folks stayed just outside of it because the tunnel was moldy. The second one was closer to the river next to the bike trail and near an abandoned depot building.

These autonomous villages, full of a variety of folks, are not something to romanticize, but rather a very good example of the self-organized ethic that tends to come out of folks when it’s a matter of life or death. For some in the camps, Hopeville was powerful counter to this society that doesn’t give a fuck about poor people, bringing out mutual aid from folks who might’ve experience similar conditions. Folks who ran a tree trimming company brought firewood for the winter, others brought tents, lumber, food, etc. There were small gardens that were planted by residents.

This taking of space was contentious for the city and most of the homeless shelters, who sought to evict and close these camps. Citing safety and weather, they evicted these camps time and time again.

Unsanctioned space, even space that is not profitable or even useful at the moment is a threat to those who seek to manage us and poverty. Vast parts of this city are empty, owned by speculators and city land banks waiting for rich investors that will never come in a million years. If we were to get the right idea and take their shit, the need for shelters and those who run them would be out of a job.

For another piece on Larry Rice, check out: Between a rock and a hard place, thoughts on Larry Rice’s new homeless camp and following eviction.

One response to “The Management of Poverty: Larry Rice, the City and Capitalism”