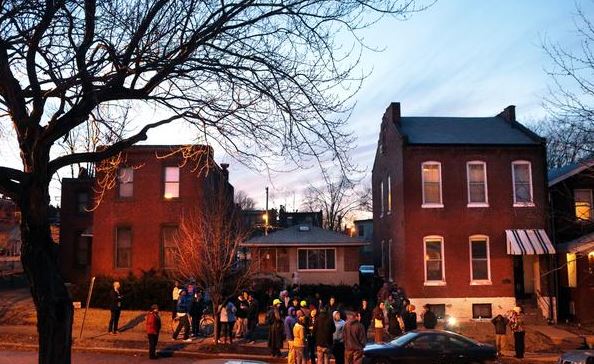 LeDarius Williams was shot and killed by St. Louis police on Tuesday afternoon. Shortly after, around sixty people gathered in the neighborhood where the shooting occurred. Through tears his mother cried, “People need to stand up. This shit is just gonna keep happening.” The crowd dispersed after a couple hours. As usual, the next day a news article reported the story and justified his death.

LeDarius Williams is the fifth person to be shot and killed by police in St. Louis and the surrounding areas subsequent to the unrest in Ferguson this August over Mike Brown’s death. There have been instances where people have indeed stood up against police shootings, and there have also been instances of little to no response. If we want an anti-police movement of some sort to continue in the months and years ahead, we have to look at what factors contribute to people settling back into the normalcy of police killing people and how to create a culture of sustained resistance. It seems important to reflect upon how the perception of innocence can influence whether or not masses of people respond.

Just ten days after the death of Mike Brown, Kajieme Powell was shot to death by police. So close to the events in Ferguson his death came as a shocking surprise when police shot him as he shouted, “Shoot me now.”

On October 8th, Vonderrit Myers Jr. was shot to death by police. Over the course of four days, there were nights of marches where people burned flags and shut down intersections. Protests also included blockading local Walmart stores, crashing a fund-raiser for a local politician, shutting down a main road in Ferguson and staging an elaborate protest during a Monday night football game.

Then on the night before Christmas Eve, Antonio Martin was shot to death by police. For two nights people gathered at the gas station where he had been shot and confrontations with police ensued. The QT across the street had it’s windows smashed. There were instances of looting at the QT and a beauty supply store. During the daytime several hundred protesters shut down an interstate highway.

When we showed up at the spot where Antonio Martin had been shot by police, so many people were in the street, angrily confronting the police about killing someone. It felt reminiscent of nights on the streets in Ferguson, but only lasted two nights.

Even with the media and police trying to justify both Vonderrit’s and Antonio’s death to prevent public sympathy, people did take to the streets and respond to their deaths at the hands of police.

On January 21st, 19-year-old Isaac Holmes was shot to death by police in north St. Louis. Some of us went to the place where the shooting occurred that night but left because other people did not show up. In the paper the following day, the police justified the shooting by emphasizing that Issac was a criminal and insinuating that he deserved to die.

As there are always many factors at play, the lack of an appeal toward his innocence in the case of Isaac Holmes may have influenced the fact that people did not gather in the streets, enraged at another police killing. The day after his death, a vigil of family and friends took place where he was killed.

Some people did gather where LeDarius Williams was killed but momentum did not continue into the night, as it did in the case of Antonio Martin. The media portrayed Antonio Martin as having a gun, trying to signal to the public that his death was not worthy of sympathy. And yet people were in the streets for two nights in a row before it let up.

The reasons people gather and protest are layered and many. Some people march against police brutality. Some people protest because they feel an injustice has occurred. Others respond because they see systemic racism as the problem. Many of us fight against the very existence of the police and the way the entirety of this society functions. But whatever the problems people find with the way things are, the perception of innocence can heavily determine one’s participation in a struggle to change the fact that police are able to keep killing people. Because the law does not and never has served our interests, we must refuse to limit our resistance to appeals of “innocence” within the confines of the law.

When, for example, unarmed black men and women are killed many people are rightly upset. We saw this in the case of the death of Trayvon Martin. However, the situation can sometimes be too complex for people to publicly demonstrate or fight back when the person killed had a gun or is said to be a “criminal” because doing so would challenge many facets of how our society functions as a whole. When people see unarmed black men and women killed by police they can more easily point to the systemic racism of the situation, for example. They can also more readily empathize with the person who has died. But when police kill someone who is black, poor, and armed it requires either the experience of being beaten down by police one’s whole life or the willingness to look at the entirety of how this society functions in order to stand up and fight back.

The system exists to protect the wealthy and ensure their safety. The system, the police state, is not broken. It is working how it is intended to function and leaving countless people killed without question. It seems important to extend the conversation around the loss of “innocent” life toward the necessity of resistance each and every time a human being is killed by the police.

It also seems important to reflect upon the conditions that leave countless black youth with seemingly nothing to lose. The social pressure to be a man and the reality of needing to make money factor in to the equation. To some extent, there is also the recklessness of youth at play. For many, however, the reality of surviving in this society necessitates “crime” and people should not be blamed for trying to defend themselves against the police or trying to hustle out a livelihood in this capitalist society. We see something worthy of affirmation in the refusal of Issac Holmes and others like him to surrender quietly, but we also recognize that attempting to take on the cops as an isolated individual will most likely get you shot and killed. Without the presence of a collective force, individuals have no way to fight back other than to take matters into their own hands, which unfortunately and inevitably ends in far too many young tragic deaths.

Many attempts at offering a collective response to society’s problems have sprung up out of the events that took place in Ferguson. And yet these attempts have tended to alienate or exclude, oftentimes physically, many of the more combative people among us. It is hard to know how to find each other, those of us that have shared in the many moments of uncontrollable anger over the past six months. It is even harder to have a conversation about how we might continue together. And yet we haven’t given up on the possibility that we could find each other again, together confronting our enemies and realizing our collective power. With any luck, this will be only one of many beginnings.

For further reading, check out a really good article written by Jackie Wang called Against Innocence: Race, Gender and the Politics of Safety.