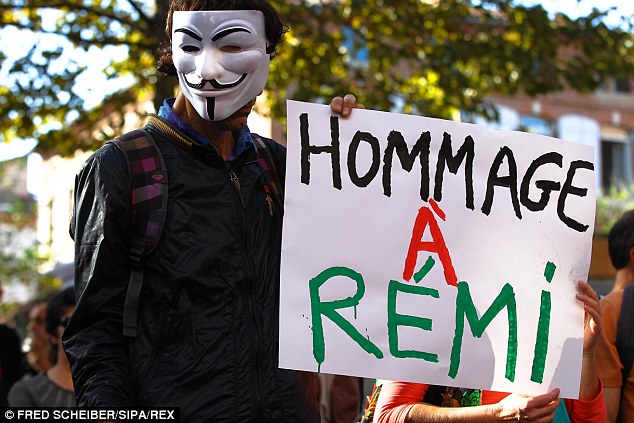 The letter that follows was written by Farid El Yamni, the brother of Wissam El Yamni, murdered by the police in Paris, France on New Year’s Day 2012, and is addressed to the mother of Rémi Fraisse, murdered by police during a protest in France on October 31st of this year. He wanted it to be made public, but the letter has also been sent to her house.

In St. Louis, as the announcement of whether Darren Wilson will be indicted draws nearer, and as Mike Brown’s family calls for peace, the lessons learned by other families on the limitations of peacefully waiting for justice could not be more timely.

I write to you at a time where in Paris violent demonstrations are condemned and peaceful sit-ins praised.

I lost my brother in very similar conditions to those in which you lost your son. My brother, who took such good care of my mother, has left us, he’s never coming back. The loss of my brother was immensely painful, and I feel that same pain every time the State kills another person. “Within danger, lies that which can save us,” someone once said. Every time the State kills, we also have the opportunity to stop it, to force it to change, and to give others back their lost dignity.

Rémi’s death is knotted up in much more than the story of a life, it’s all of our lives, individually and collectively. The criminalization which has been put into place is horrible, it was the same thing for our family. I understood later that it was on purpose. I only wanted one thing, that the justice system find the truth, and give my brother the dignity that he deserved, in an atmosphere of calm, and that this story help everyone, all of us, the governed, to better love ourselves and for the police to reconcile with the people. I didn’t think it was possible that the police could accept murderers into their ranks. I didn’t know enough at the time. I was wrong. The neighborhoods burned, we called for calm: every car and every dumpster set on fire lived as an insult, as a thorn through the heart, a thorn that was being pushed in.

Then time passed, they promised us the truth, but we only got lies, only false promises, like so many before us. People warned us, but we didn’t believe them. François Hollande (French President) himself, took my mother in his arms and promised her that he would help to shed light on the circumstances of her son’ s death. We were suffocating and calling for the justice system to help us.

And then we understood that this was not an isolated case, that so many other families had lived and were living the same pain. There are so many humiliations and mutilations consciously committed by the police and covered up by the justice system, so many!

We also discovered the way that the police think, and it gives me chills up my spine. For example, last Wednesday during a demonstration in Paris, a police officer told me “1-0” in front of his work-mates, who were all laughing when they saw my t-shirt slogan, “Watch Out, Our Police Kill.” Not a single one of them contradicted him. Examples like this, so many people live them daily, they can’t stand the police any more and they can’t see any end in sight.

I understand the call for calm, we made them too. Please understand also that many people don’t believe in this system anymore, this system that gives de facto impunity to the police. Please understand that we can only think in terms of non-violence when we imagine that the opposing camp is capable of putting themselves into question. In this case they are humanly incapable, because they consider that questioning the existence of the police, is questioning the existence of the State. For the past 40 years, the police kill with impunity, over and over. For the past 40 years, we help the same process to obscure the murders committed by the State, despite the videos, the testimony, the evidence. For the past 40 years, there have been sit-ins, demonstrations, books, politicians posturing, and court cases at the highest level. For 40 years, nothing has worked.

This is how it works: contradicting articles in the press, lies from the prosecutor, badly conducted and biased investigation that will end in a ridiculous and token conviction after several months or years, or even in an acquittal. The worst part is that those that will bury the matter will get promotions, and those who killed our brothers, or sons, or our friends, they will be treated like heroes by their colleagues. This is the reality that you will live as well.

Manuel Valls (French Prime Minister) said that the violent reactions are “insults to Rémi’s memory,” but know that Valls, by his inaction to confront police impunity, it the most guilty of your son’s murder. He is a repeat offender. He came to our city a week before the release of the second botched autopsy (of which he already knew the details), and he only spoke of the affair to better condemn the violence of those who were moved to revolt by my brother’s death.

Ma’m, Sir, people are fighting for Rémi, for their dignity and for their ideals. They are fighting for you, for all of us, for solidarity to be effective. Those who are are fighting know enough about the maliciousness of those who govern to understand that they, the rulers are trying to make us believe that we are in a State that respects rights, when we are in a State that only respects duty. The State doesn’t respect the laws that they ask us to follow. It plays with our lives, our bodies, our trust, our money and our dignity. It asks us to be always on our knees, that’s unquestionable for them.

I have written this letter to you, as to all those who will read it, to let you know that I understand today more than ever how much non-violence has its limits in situations of crimes of the State. Non-violence, by it’s powerlessness, is sometimes more condemnable, more murderous than violence itself. Those who govern us are malicious, sadistic, opportunistic, repeat offenders. They should be made to leave by any means necessary.