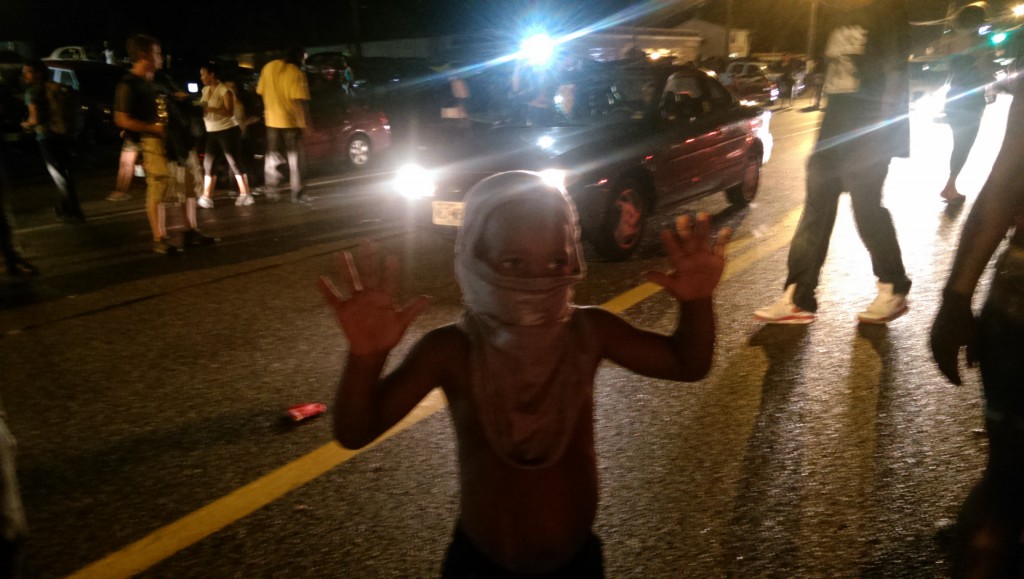 What began as a protest movement after 10 days of sustained defiance, has taken a couple shaky steps towards revolt. The situation here is still fluid and ripe with potential. Locally, people are surprised that similar unrest hasn’t sparked off in other cities. If it were to spread, the scope here would likely widen. It’s difficult to get a sense of how people outside the metro area interpret what’s happening here. What follows are some observations from St Louis residents and participants in the struggle who might give a clearer picture of this strange new reality.

Cars, Guns, and Revolt in America

West Florissant is a major street that cuts across North St. Louis County and North City. A quarter mile stretch of the road has been the primary gathering place for protesters. Just outside that stretch, in a strip mall parking lot, is the joint staging area for the Police (City, County, as well as dozens of smaller municipalities), the Highway Patrol, and the National Guard. The small stretch is home to many looted and burned (to various degrees) businesses including the QT – which has become a landmark, tourist destination, and gathering place for protesters. Canfield Drive intersects with this stretch of West Florissant, a road that leads to subdivisions and the apartment complex where Mike Brown was killed. Police fear to venture too far down Canfield.

On the days when the police allow traffic to flow, West Florissant becomes congested with vehicles, many of which are loaded down with passengers, both inside and out. Routine activities include blasting music, squealing tires, and taunting the police by way of insults (“fuck the police”, “fuck 12”), doing doughnuts, and taking runs at them, just to break at the last minute. People jump from car to car in celebratory fashion, chanting, flirting, singing, drinking, and smoking. When police lines shut down the street on either end of the stretch, cars pour in from side streets to do more of the same. And when the protesters get rowdy enough, people openly ride their cars up to stores, fill them with looted goods, and escape back into the neighborhoods.

A significant number of protesters are armed. In the first few days, a common tactic was to fire shots in the air to scare the cops off when they got too close. Some openly talk of going to war with the police and don’t hide the fact that they are carrying. The last few days people have begun shooting at the police. Tragically, the only people hit so far have been a handful of protesters- some of them with life-threatening injuries. People are beginning to advocate for more restraint with the gun fire and better aim.

The rebels (and the police) have no experience with such a situation. Revolt like this hasn’t been seen in America since the 70’s. People are learning how to make and utilize Molotov cocktails, barricades, projectiles, and fire, as well as when and where it makes sense to attack. Coordination and communication are difficult outside moments of rioting. Perhaps it’s because there’s no safe and comfortable place to gather and share ideas. The QT could potentially serve this purpose, however just today it has been entirely fenced off. The second night of unrest must have involved some exceptional coordination as crews smashed up stores all over the metro area, filling their cars with all sorts of goodies.

The police are caught in a bind and are seeing the limits of using force. If they keep their distance protesters riot, but when they come with force they inspire more people to come into the streets, which lead to more riots. At this point, if they want to crush this thing they have to convict Darren Wilson (the cop who shot Brown) of murder. But the wheels of justice are slow. In the meantime, they’re going to have to work to divide the protesters. In their desperation, all of the time-tested dichotomies are being deployed- protester vs criminal, honest vs opportunist, resident vs outsider. Unfortunately the police have a long list of accomplices willing to do the work for them, most of whom are fully aware of what they’re doing. From the New Black Panther Party to the Nation of Islam. From HOT 104.1 to FOX News. From MORE to OBS. From Jesse Jackson to Al Sharpton. From Nelly to Tef Poe (Po). From current St Louis Mayor Slay to future St Louis Mayor French. And the list goes on.

While they may be succeeding on TV, radio, and social media these loudmouths aren’t having as much success on West Florissant (despite their own reports to the contrary), and that must scare the shit out of them. It’s worth mentioning that social media is where they have had the most success. They’ve become pros at getting twits who will never go down to Ferguson to retweet their fewer than 140 character self-serving reports ad nauseam. In return the twits get to feel as if they’re a part of something. Maybe these rumors, half-truths and lies will prove to be damaging to people, (and that would be terrible) but most of it is transparently conspiracy theory bullshit to anyone with critical thinking skills.

There are still far more black protesters than white on West Florissant, but there seems to be more diversity as the struggle continues. Early on comments directed at white protesters such as “why’re you here” were answered with “man, she/he hates the police too!” Now if the presence of white protesters is even noted it sounds more like “thank you for being here.” A sinister few liberal and leftist groups try to spread absurd stories that small groups of white agitators (or even KKK infiltrators!) are tricking black protesters into going on the attack. The racist underlying assumptions about the exploitable nature of black protesters makes sense when you realize that’s exactly how groups like the Nation of Islam and the New Black Panther Party view them. Back in the real world, white protesters are just now starting to catch up with some of the ferocity of their black comrades, who’re grown enough to make decisions for themselves.

The authorities engaged in some good cop/bad cop by putting Ron Johnson (a black officer who grew up in North County) in command of police operations. During the light of day, he and his officers take off their riot gear and walk alongside protesters. This trick has worked on the self-imposed protest leaders who openly work with Johnson to control the crowds.

There are countless calls from the Nation of Islam, the New Black Panther Party, and their socially conservative ilk for women to go home, for strong black men to step up, and other such patriarchal attempts divide the protesters. The first couple days these calls were met with tremendous resistance from mostly black women. “Fuck you, go back to church”. “I’ve been here from day one”. “It’s our babies who’re dying”. The constant harassment seems to have taken its toll as fewer women are out, especially after dark. But women are still out front taunting the police and rushing into stores to get theirs.

Nearly all who attempt to restrain the actions of the most confrontational and declare themselves leaders of the community are over 40. Aside from physically stopping young people from acting, they try to ostracize them from the protest. These wise elders may walk around with a paternalistic aura of authority, but the youth aren’t fooled: “I can’t listen to these old heads, been sayin’ the same thing for years.” “This peaceful marching ain’t workin’, without the looting nobody would’ve gave a shit about Mike Mike.” Still they continuously call for the boys to grow up and be men and for the young women to go home, because the streets aren’t safe for them.

There are some indications that the liberal groups are distancing themselves from the city of Ferguson. They are beginning to organize rallies and civil disobedience in Clayton and Downtown St Louis. Maybe they’re giving up their campaign to control the angry elements. Maybe they’re trying to put a more peaceful media-friendly face on the movement. Maybe they’re trying out new strategies for getting justice. Only time will tell.

The situation in Ferguson is scary. It’s easy to understand why some, especially those who live near the activity, want a return to normal: bullets, tear gas, sound cannons, check points, fire. But despite all this, there are a sizable number of us who don’t want a return to normal. We descend on West Florissant day and night to figure out how to avoid it. To us, the struggle is not limited to justice for Mike Brown and the conviction of a single cop of murder in a court of law. We are doing this for ourselves, our friends and family, as well as Mike Brown. We’ve already found this system guilty- the racism, the class structure, the government, the police. When the “peace” you are continuously urged to return to looks like powerlessness, humiliation, poverty, boredom, and violence, it shouldn’t be a surprise many choose to fight. And to witness the ferocity with which some of us fight, it’s almost as if we’ve been waiting for this moment our entire lives. Two nights ago people took a run at the police command post forcing the authorities to call in the National Guard. Previously this would have been unthinkable, but then again just two weeks ago this whole thing would have been unthinkable.

6 responses to “Ferguson. Over one week in.”