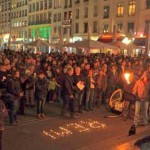 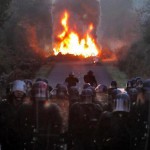 Support from the ZAD in Notre-Dame-Des-Landes to Ferguson

The following is a statement of support from the ZAD (Zone À Défendre, the  zone to be defended) to those fighting back in Ferguson. The ZAD is “an ongoing occupation in countryside close to Nantes in France which according to the decision-makers should make way for an international aiport.”  Texts and annoucements from the ZAD […]