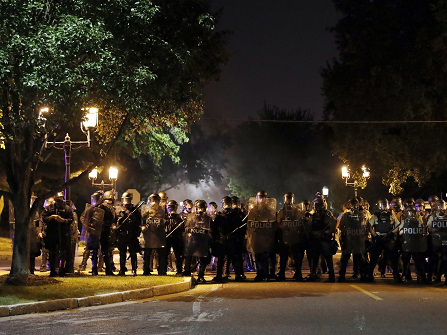 For the most part, I’d rather hear what people of color have to say about the Stockley verdict and ensuing protests, but I’ve been drawn out by the attitudes and statements that have been made by people recently. These statements make me feel like it might benefit the conversation for people to be informed on where I’m coming from and why I do what I do. This is primarily a response to an article published by the St. Louis American entitled “To disrupt or destroy? Police accountability movement at a crossroads” by Chris King (Editorial Director for STLAmerican). However, some of the things King says touch on some attitudes people have in the broader community. So, I’m addressing them, too.

Honestly, I’m used to hearing myths like “white people started the confrontation with the cops”. Maybe they did. Why does it matter? I also normally don’t speak out against this myth, because I don’t want to incriminate the brave young black folks who actually enough sense to destroy what destroys them. We’re out there together in some sense so why would I speak out against them? To be clear, it’s not “who done it” that I’m addressing here, but rather what I believe to be an attitude of internalized and subconscious racism toward black youth, among other things.

Mr. King, you claim that according to eyewitness accounts the Delmar smashup was started by young white men. Finally, the holy grail, eyewitness accounts! Your journalism has preserved its own sanctity with the thin veneer of legitimacy that is your, likely unreferencable, eyewitness accounts. The truth is that even if you had dozens of eyewitnesses you wouldn’t truly know how that moment came to fruition… and you probably never will. What I will tell you is this: We did it together. Black and white and whatever else, we came together to attack the police and the shop fronts of delmar, downtown, the central west end, and beyond.

We offended your sensibilities, I know, because we didn’t just attack the police and shop fronts. We attacked the political process and your way of life. I mean, how can we lead successful lives if we run amuck in the streets acting like wild, poor… animals… right? We didn’t wait for the clergy or the politicians they negotiate with. We didn’t go home when the proverbial streetlights came on the way the activist mediators of our rage would have liked us to do. No, we acted on our own initiative to make our own contributions to settling the score.

I did this because at so many different times in my life I have found myself in the streets. No signs or banners, no legal observers or media. The streets have taught me that I can depend on no one to solve my problems for me. They’ve taught me that when someone approaches or appeals to me about solving my problems they are always acting with their own interests above mine. So, when I have a problem like crooked cops acting with impunity, I assume I’ve got to solve it myself; But I’m lucky enough, in a fleeting moment, to find accomplices in the street.

You’d be surprised, but underneath the rage and retribution is another motivation: Love. I’m tired of seeing the people I love get hurt. It feels like constantly the black folks and people of color in my life, who are so dear to me and have helped to make me who I am today, are having to deal with some kind of systematic injustice. It doesn’t ever seem like it’s just one thing either. There’s a mountain of injustices hanging over the head of every POC I know. I don’t know about you, but I defend and fight for the people I love. That’s what I would want them to do for me.

Don’t get me wrong I have my own bone to pick with the cops. Did you know that policing in America started with slave patrols in the south? Did you know that when slavery ended, the prison system proliferated and the convict lease was created? That under this system it was worse than slavery  because since no one owned the convicts and they could work them to death without worrying about any sort of fiscal loss? That prisoners today often do unpaid labor or labor that pays as little as 12 cents an hour? That prisoners still work in the field, patrolled by guards on horseback, at the former plantation known as Angola prison? Here’s the kicker: Have you ever read the 13th Amendment?

Here’s a direct quotation from the 13th amendment “Neither slavery nor involuntary servitude, except as a punishment for crime whereof the party shall have been duly convicted, shall exist within the United States, or any place subject to their jurisdiction.”

In essence the entire apparatus of slavery was transformed into what we now call the criminal justice system. Under this system we are all vulnerable to enslavement regardless of our race. As a function of this we are also all under broad surveillance. This affects the type of opinions we feel free express in public, on social media, over the phone, and so on. Without these opinions being shared freely it affects our overall perception of the reality of our situation. The police support and operate these systems in order to manage us in a way that benefits their bosses. Do you want a future to exist where your children and their children bow down to these ultimately white supremacist bullies? I don’t.

Earlier in this letter I made a reference to internalized and subconscious racism toward black youth. I was talking about the narrative your using of the “White Leader – Black Ally”. I think that this narrative doesn’t give enough credit to young people and to rebellious black folks in general. Is your assumption that black people have to be lead by white people in order to attack the cops and riot? Do you think people aren’t able to come to this decision on their own? The Revolutionary Communist Party may have had some influence in the street, but the fact is that in order for someone to physically teach someone to make a Molotov there has to be a person who wants to learn how to do that. Young people have inherited this world from the old and I hate to break it to you, but it kinda sucks here. While we’re still young enough, we aren’t chained down with a family and a mountain of bills. We can afford to take the risk of fighting back. Believe it or not some of us would rather die or go to prison than live a subdued life as our bosses pawn in pursuit of the only “positive” life path that’s been offered to us. We want the freedom and dignity that has been dangled in front of us as part of the elusive American Dream. If we have to bite the hand that feeds in order to get it, than so be it.

The masked up white men may have made some moves at the Delmar smashup, but they were by no means leaders. In fact, most people who were still there when it went down had spent the night ignoring the orders and suggestions of several different people who would have liked to lead us. We were and are an uncontrollable group of people. I get the sense that when you saw that almost everyone who was arrested that night was black it upset you. Maybe you needed someone to blame, maybe you wanted vengeance against the white radical who always seems to get away. When I saw a picture of the people who had got caught all sitting on the curb I too was upset, I too wanted vengeance. But the difference between me and you is that I’m self aware enough to know what side I’m on.

From reading your article I get the impression that you are working in cooperation with the police. By doing that you put yourself on the wrong side of the thin blue line and history. The cops are who have messed up here, not the rioters. The fact that you seem to be going out of your way to denounce them and, even provide information for their arrest, shows that you don’t get it. You are seeding division in movement which is fighting for  police accountability and to defend its communities, rioters and rebels give that movement teeth. The cops don’t hear us when we stand on the corner with signs, they hear us when cops get hospitalized, business districts get wrecked, and infrastructure gets shut down. They’ve left us with no choice, we’ve got to defend ourselves.

Allot of activists romanticize Assata Shakur while denouncing violence. What they forget is that Assata rolled with the Black Liberation Army. Cop killers who eventually broke her out of prison. Do you know why they did that? Why they took that risk? Because Assata was the heart of the Black Liberation Army. She reminded them why they were fighting: Because of their love for their people. I’ll leave you with Assata’s prayer which we often hear in the street.

Original article which this is mostly a response to
http://www.stlamerican.com/news/local_news/to-disrupt-or-destroy-police-accountability-movement-at-a-crossroads/article_8b8437cc-9bf8-11e7-97e4-7789ed0f565c.html