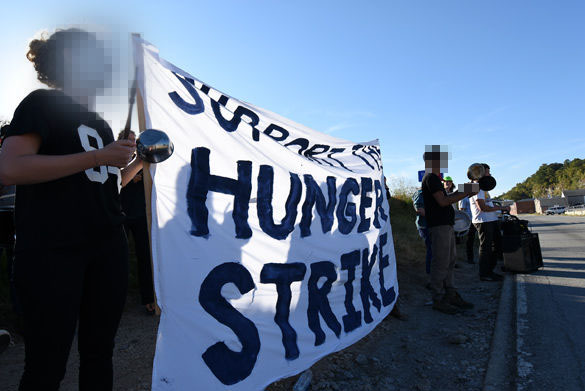 On September 23rd, prisoners in the administrative detention unit at Menard Correctional Center in Chester, Illinois declared a hunger strike in response to the administration’s continued unwillingness to respond to their demands for relief from their conditions of long-term solitary confinement. See below for their list of demands and description of their conditions. This strike is a continuation of a series of hunger strikes by the prisoners there, which began in January 2014.

On the first day of the hunger strike, about 25 of us converged on Menard Correctional Center in Chester, Illinois from multiple cities with music and drums, yelling and banging pots and pans to make noise for those inside to hear us standing with them. In response, prisoners banged on the walls of their cages and screamed back through shuttered windows “Freedom,” “We hear you,” “No More A-D” [Administrative Detention] and “Hunger Strike.” With our voices hoarse, we returned home with our networks on the outside stronger and, we hope, our connection to those inside stronger as well.

The separation between prison and the outside must blur more and more, especially if there are some of us who might someday find ourselves inside such cages. The noise demonstration—a tactic that is employed by anarchists and radicals all across the world—is a direct form of communication that helps to slightly break the physical barriers of prison down in the way that allows us to actually hear and sometimes see each other. For anyone who has ever been locked up in prison or jail and all the confusion it entails, just to see a face or a hear a friendly voice to break through the isolation is enough to boost spirits.

This tactic does not just need to be employed in prisons in rural areas like Menard, but also be taken to the jails in our towns and cities; often a worse experience for those of us who have no money for bail, are either forced to plea out or have to wait years to even be tried. Making contact and hearing the hunger strikers voices was a powerful thing, but we cannot delude ourselves on the back to think it’s enough. Such events must become more common, as well as some creative and innovative explorations of other more direct communication methods inside prisons, in addition to making contact through writing to prisoners or calling-in to prison authorities.

We do not yet have updated information about the hunger strike at Menard, but when we do we will post an update. In the meantime we encourage everyone to take action in solidarity with the comrades locked down in horrible conditions and doing all they can to resist.

The following information is drawn from letters received in September 2015 from prisoners in Administrative Detention at Menard:

We now only get 1 day a week of out-of-cell exercise (yard). We are in our cells 24 hrs. a day, 6 days a week. We are being excessively confined in our cells. We are still not allowed to participate in any educational programs. Our mail is not being picked up or passed out 5 days a week, as they are supposed to.

We don’t see any end to this indefinite isolation/solitary confinement. Due to these issues and more, we are going to go on hunger strike once again. We will be declaring a hunger strike on September 23, 2015. We will feel very thankful for your help in spreading the word.

Our core demands are:

· We demand an end to long term solitary confinement.

· We demand minimum due process at Administrative Detention Review Hearings by providing inmates with written reasons, including new information relied upon, for Committee’s decision for our continued placement in A.D. and be allowed to grieve all adverse decisions. As it stands, the basis of the Committee’s votes are kept secret.

· We demand more access to outside recreation for the sake of our physical and mental health. As it stands, we are confined indefinitely to these cages for 6 days out of the week, with the exception of one 5-hour day. This is unbearable.

· We demand that meaningful educational programs be implemented to encourage our mental stability, rehabilitation, and social development for the sake of ourselves and our communities that we will one day return to.

· We demand access to more visiting privileges. For most of our families traveling to Menard is like traveling to another state. Considering the distance, 2-hour visits behind plexiglass is insufficient. We should be allowed 5 or 6 hours. Moreover, our family members, including inmates, should be provided the human dignity and decency to purchase food items and refreshments from vending machines after traveling such great distances. This would benefit one’s social development, as well as benefit prison staff environment.

We ask the public’s help by calling the warden, the Director of the Illinois Department of Corrections, and the Governor on September 23, 2015, and so forth, to check on our welfare.

We will stay on [hunger strike] as long as possible in order to hopefully bring some change to our conditions. We thank you for any kind of support you can give us.