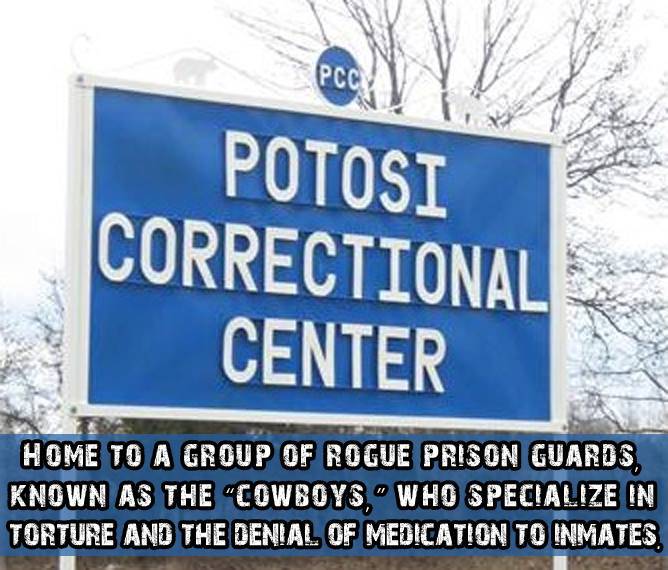 Potosi Correctional Center, which could more accurately be described as the Potosi private torture dungeon, has for the past months or longer been home to a group of rogue prison guards, known as the “cowboys,” who specialize in torture and the denial of medication to inmates. They have intentionally been targeting those involved in the last hunger strike.

The Greater Kansas City IWW General Defense Committee Local 15 has been in contact with multiple inmates in the Potosi correctional center, and have received the same reports on this group that goes by “the cowboys” and their counterparts.

One inmate in particular, Syheim D. El-Mu’min, has been repeatedly harassed and abused by this group. In our correspondence with him, he has sent us these reports of what has been going on, and how people can help:

*On the date of 2/25/14, I was assaulted by Col. Alan M. Yount and an officer – Col. RentFro at the approximate time of 4:30 am. These two officers are a part of a group of rogue officers who go around the prison calling themselves “the cowboys” (I dub them cowards) because they lack the intestinal fortitude to face me as men. These officers hold malicious feelings towards me for filing grievances, writing letters to legislators, and the directors in Jefferson City. So on the date of 2/25/14 at 4:30 am, while in the process of cuffing me up to be escorted to the wings table receive my morning insulin (I’m a diabetic), I was assaulted. As I was complying with their orders to submit to wrist restraints Col. A. Yount applied the wrist restraints on me extremely tight, cutting off the blood circulation in my hands and causing pain to shoot through my arms. They have me on special security orders where I have to wear two pairs of handcuffs – cuffs on my wrist, and leg shackles above my elbows (policy does not support elbow shackles) and leg restraints on my ankles whenever I exit my cell. So I’m pretty much shackled up from head to toe. Anyway, while Col. Yount applied the cuffs extremely tight on me he reached into the food port and grabbed my buttocks. Now he did this to cause me pain because he was aware of an operation I had on 2/24/14 where the doctor had to lance a boil that developed there from build up scar tissue from an old bullet wound. I was bandaged up back there, and when he grabbed me I sort of jumped and that’s when he (Col. Yount) and Col. Rentfro snatched me through the food port by the teeter which was connected to the handcuffs. They then twisted my arms, bending my wrist and hands, cutting my left hand open. Once the cuffs were off I refused to allow them to close the food port until the shift supervisor was there to see what they’d done to me.

*On the date of 2/26/14 at the approximate time of 4:35 am, I was taunted by Col Yount and was denied my morning insulin as well as my breakfast tray.

*On the date of 2/26/14 I filed a PREA complaint under the prison rape & elimination act due to the fact that Col Yount’s actions were inappropriate and could be constituted as sexual in nature since he sadistically and maliciously tried to harm and degrade me.

*On the date of 3/2/14 at the approximate time of 4:35 am while being escorted back to my cell from receiving my insulin. I witnessed a sign on my door scrawled above my name. The sign was derogatory in nature, I snatched the sign off my door and demanded to talk to a “white shirt” – shift supervisor – Col Davis arrived around 8:30 am and the officers who were escorting me showed him the sign. He pretended to review the camera to no avail. He (Col Davis) neglected to contact the proper authorities because the statement was sexual in nature, thus it must be reported in response to the PREA act.

*On the date of 3/3/14 and 3/4/14 I was denied my morning insulin by Col Yount Col Rentfro. I was harassed and taunted throughout their shifts.

*On the date of 3/15/14 Col Yount and Col Duncan denied me my morning insulin. Once I exited my cell to have the elbow cuffs applied, Col Yount applied them extremely tight, cutting off the circulation in my arms. I then refused to allow the leg shackles to be applied until the “white shirt” arrived. Well, Col Randazzo arrived and he approved of the unprofessional behavior. The nurse just stood by and refused to step in once I asked him (Nurse Henry Hueffmeier) to check the restraints. Nurse Huffmeier violates the medical autonomy policy because restraints are not to be used to inflict pain nor punishment and it is protocol for medical personnel to check the application and use of the restraints.

To avoid confrontations with these corrupt officers and to prevent a physical altercation with them, I’m having to forego my morning insulin. Their whole objective is to deprive me of my insulin, and I really hate that I’m allowing them to get this off on me. But if I continue to come out, and these officers continue to taunt me, I’m going to be forced to physically defend myself.

In accordance with policy and procedure staff conduct D2-11.10 as well as the PREA protocols, staff who are un-professional in such a manner are not supposed to have contact with someone bringing such complaints against them under PREA. However, Lt. Blair the shift commander and the supervisors Co2 Wilfong, Co2 Randazzo, and Co2 Payne, all are in cohorts with these rogue officers and are a part of this group called the “cowboys.”

As you might have noticed, these incidents occurred around 4:30 am. It’s because the shift these pigs work is from 11:30 pm to 7:30 am. I need for people to contact the director George A. Lombardi (573-526-6607) PO Box 236 Jefferson city, MO 65102, Warden Troy Steele (573-438-6000) as well as the Missouri department of public safety (573-751-4905) or (573-526-7732) and ask to speak to Marc Peoples and bring my PREA issues to his attention. Please tell him I’ve written to them twice in the last couple weeks and I have yet to receive a reply. When you talk to the director and warden or write to them, inquire why these officers are still permitted to have constant contact with me only to continue their abuse.

Also, I have written (and you may too) to representative Paul Fritzwater (573-751-2112) MO state representatives, state capitol – 201 w. capitol ave, Jefferson City, MO 65102 (inquire about these issues I’ve written him about, I hope he got the letter).